We are the Madison, Wisconsin, local action group of the international organization 350.org. Started by Madison area climate activists in January 2012, we plan and participate in local, national, and international actions to raise awareness of the pressing need to address climate change.  We are helping build a global movement that is creating the political will necessary to pass international climate legislation that will effectively return our planet to a stable climate.  We help unite the message of many groups that are working for a livable climate into one specific goal:  we need to get below 350 ppm.

The 350 Madison Climate Action Team is dedicated to achieving a reduction in atmospheric CO2 below 350 parts per million (ppm). We are working in concert with a powerful global movement that seeks to make a just transition to a world fueled by 100% renewable energy.

350 parts per million is what many scientists, climate experts, and progressive national governments are now saying is the safe upper limit for carbon dioxide (CO2) in our atmosphere.

Accelerating arctic warming and other early climate impacts have led scientists to conclude that we are already above the safe zone at our current 400 ppm, and that unless we are able to rapidly return to below 350 ppm this century, we risk reaching tipping points and irreversible impacts such as the melting of the Greenland ice sheet and major methane releases from increased permafrost melt. 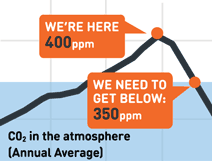